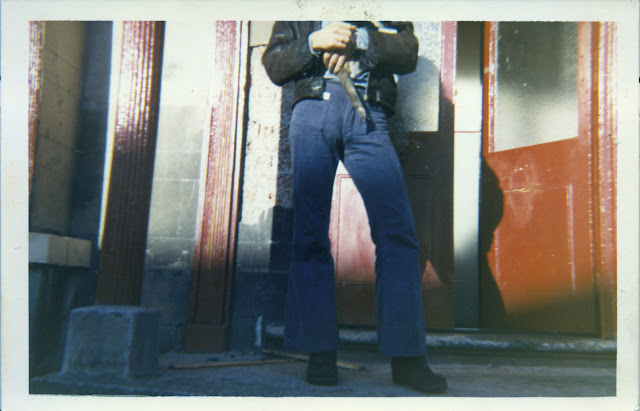 The memory is hardly a visual one anymore. It is just a vague notion of been allowed to have a go with the box with a small plastic window you looked through with one eye. Kind of intriguing. What can I say? I missed the target largely. Or it was an early artistic statement. Got the feet quite nice. The subject is Brian who later became my stepdad holding our cat, Zappa (my mum denies it was anything to do with Frank).
I remember the house, most of my earliest memories were formed there. It was the Lord Mayor's residence way back when. We rented one half of it. Distinctive with it's mock pillars and double doors painted a bold red. A perfect background for a pair of legs in blue flared trousers. When I look at the pic now I think it could be any where. In fact, it is more evocative of North America than the UK (it would take me another twenty odd years to get over there). After a good few years of being away I went back to the house recently, see how it was holding up. A newish block of apartments stood there instead. The stepdad and the cat no more too. It's all gone. Forty years on and only the picture remains the same.
Posted by Silentfoto at 11:26 PM No comments: