The Way Things Were Then


What can I say about this image? Has some emotional resonance to it, a portrait of me and my life at that particular moment. Taken atop Mountain View Cemetry in Oakland. I would spend a lot of time there, haunting the place. One of my corners. Mountain View is a popular open space in this part of the world for dogwalkers, art students at the nearby CCAC, grave robbers, errant photographers and the otherwise lost and other lost souls. Immaculately kept, the cemetery was designed by Frederik Olmstead, the architect of New York's Central Park and San Francisco's Golden Gate Park. His vision saw Nature and Human Desitny converge and intertwine. Hmm. Just like felt photography can be. It's an impressive piece of terrain looking down the slopes of the East Bay hills to the bay, SF and the Golden Gate beyond. A very large and rolling piece of landscaping with winding roads. Some of the leading lights of the bay areas are buried here. Lots of Merrits, Bechtels, Crockers up there on Millionaire's Row - monumental crypts bigger than houses. Elizabeth Short is buried here too, the Black Dahlia, although I never found.
I think I was improperly / creatively using one of BCC's new tilt-shift lenses to keep the tall trees away from focus. Resonant as part of my existence seemed to be seriously out of focus too - in a particularly remote frame of living when I took this. This is what my life looked like. Basically just me, the car and my camera. Enough to keep me going apparently. I can't decide if I am looking at an opening or a void here. Definitley a measure of resignation to how I felt about the world I inhabitated. The colour cast adds to the ephemeral aspect of the composition too.
Posted by Silentfoto at 6:20 PM No comments: 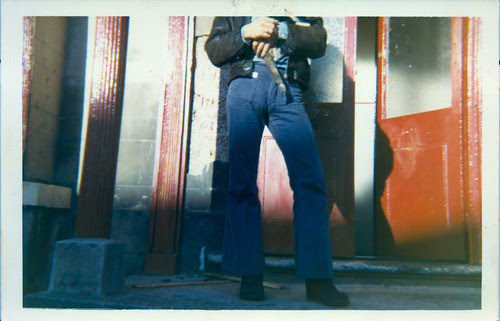 My First Picture, a photo by SheffieldStar on Flickr.
Posted by Silentfoto at 5:08 PM No comments: