A Shot in the Dark 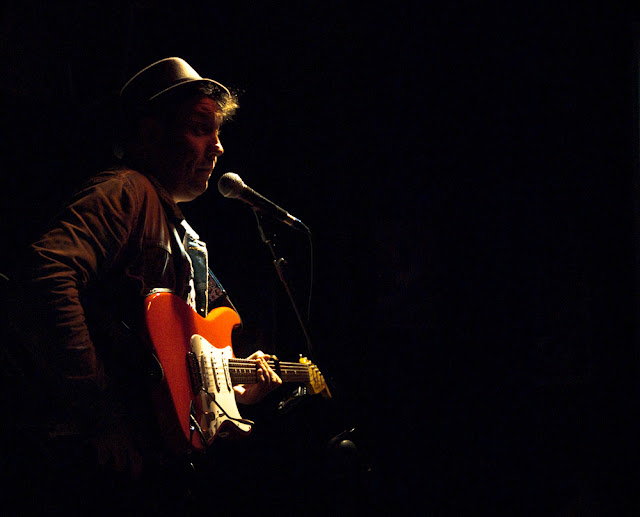 I had not heard anything of Martin Stephenson since leaving the UK 15 years ago.
Recently returned, I spyed his name on the entertainment schedule for my local pub. The pub has a small concert venue in the back. Bought a ticket straight away since the stature of MS's reputation as a songwriter & performer is far bigger than the venue. Although Duanne Eddy played here a week or two later. Not bad for a suburban boozer in a provincial town like Sheffield.
I did not intend on taking my camera. Another long walk in the countryside made me sufficiently late to dump camera at home. So I took it to the Backroom and was surprised to find myself standing right next to the stage. Let the snapping begin. I only had the my big 18-200mm zoom in tow. It's 3.5-5.6 -  a slow lens and entirely inept for dark concert venues. Flash was not really an option. Fortunately, my proximity to the stage gave me a chance, if I shot as wide as I could. I also had to anticipate when MS was likely to arrest his movement for half second or so. Not easy since the guy is a little hyper even when not on a stage behind a microphone. Basically, the most coherent shots were taken between songs when he likes to slow to a canter and talk to his audience.

About half way through his set the comments started to come my way. Generally good natured, but definitely an inquiry into Mr. Photographer & his camera over there in the corner. Hey, once your in that mode, you forget your inhibitions, and you climb into the camera.

I was pleased with the results considering the conditions. The angle i.e. shooting from behind his right ear made for some interesting content, good profile shots, and a different view of the energy a performer puts into his act.